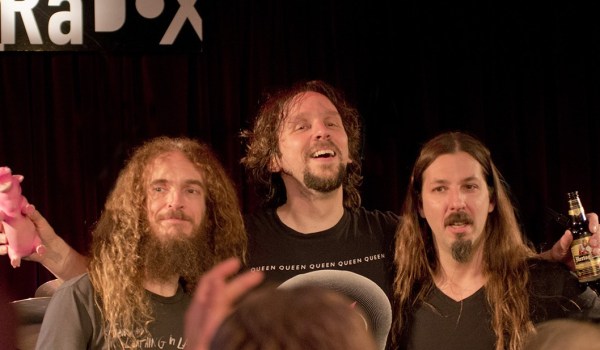 The Aristocrats played live at Paradox February 26th 2014 with support of The Godsticks. Review by Frank Hurkmans and photography by Hen Metsemakers.

After Paradox announced they booked The Aristocrats for a concert (August 2013) we were looking forward to hear and see these very gifted musicians playing live together without having to serve a band leader.  We have seen those three musicians play in several other bands the past few years. Guthrie Govan  toured intensively with Steven Wilson last tour.  He was one of the pillars in that band and showed besides technical chops the ability to enrich Wilson’s music with a very varied palette of emotional and lyrical sounds to give Wilson’s lyrics and musical colors an extra dimension. Marco Minneman was also part of the first European leg of the  Wilson tour before he joined Joe Satriani on an intensive world tour. Minneman was advised to Satch by no one less then the mighty Mike Keneally and Satch accepted Minneman to his band without having heard Minneman play! Bryan Beller, who is a long time friend and musical companion of Keneally first toured with the Mike Keneally Band after also joining the Satch tour together with Mike. The Minneman/Bryan combination was the best rhythm tandem Satch ever had in my opinion. In all these musical settings the three musketeers played more or less a side kick role in other gifted musical master minds’ bands  without having the lead. Don’t understand me wrong: in all bands mentioned they were offered space enough to show what they are musically able too. However there was of course not always the setting for showing their own compositions to the public.  When we were given the opportunity to write a scoop review of the latest Aristocrats CD “Culture Clash”, almost one month before its release,  we became even more curious and desired to watch them live. We felt very honored of course and our review was posted at the release date of the album.  And now at last we had the opportunity for an Aristocrats show. 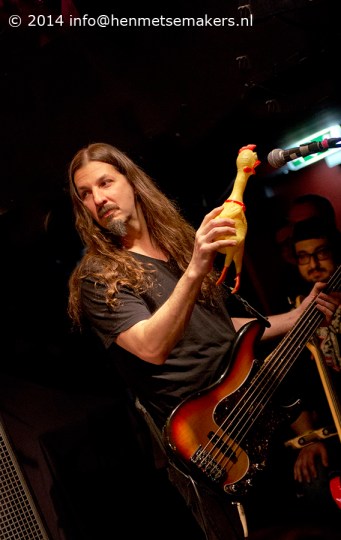 istocrats on a high musical and entertainment level

20 minutes after the nice warming up by Godsticks the three matadors entered the stage guided by a tape playing the spangly, mariachi instrumental “Fiesta” from the parodic band Ween. An appropriate musical announcement for the entrance of the trio. They were all looking in a very good and relaxed mood when they entered the stage.

The Aristocrats served an almost two hours during lasting musical banquet of music originated from there own composing skills. A banquet with humor and parodies on several levels; musical tricks, storytelling, entertainment on stage, making jokes about each other’s intrinsic skills and cultural background characteristics including audience participation. These cats showed an almost unbelievable mutual connection during the whole show! And the audience really appreciated all the ingredients.

Basically these three gifted men live their dream: creating and making the music they like from out of 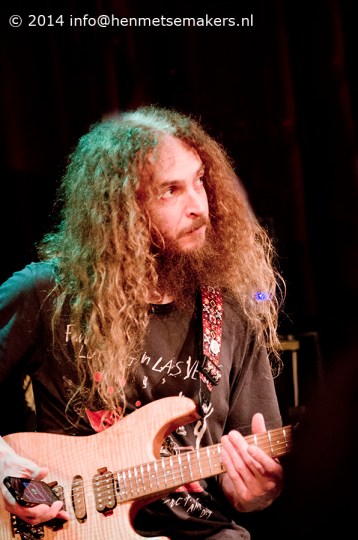 their deepest self. Choosing to follow their passion and making music is their mission. And in the Aristocrats they can really show what they are able to do. And everything in live is relative: they also don’t take themselves always seriously.

The band started with a loosely introduction to Govan’s “Fugitive Jack”; the first bars only starting with drums, then the bass fell in and the guitar started to yell. The relaxed attitude and easiness how this tune developed toward a high peek was exemplary of the musical level during the whole concert. The interplay felt telepathic sometimes and with an easiness seldom seen by us.

Bryan Beller acted basically as the master of ceremonies during the whole evening, introduced the band and paved the ground for his fellows to explain the background of the majority of the song titles. The introduction of some of the songs reminded us on the way Frank Zappa announced the songs on his famous ‘Roxy & Elsewhere’  album. Beller proudly presented his firm rock song about the theme ‘tits’  under the name ‘Sweaty Knockers’; a very sweaty performance indeed.

German born Marco Minneman, very humorous, in an attempt to speak the same Oxford English language as Govan (English born) explained the background of ‘Ohhhh Nooo’ when Govan let fell down his amplifier just before a gig. He also explained the song has some 17/16 meters in it. This song reminds me still to Jeff Beck with extremely varied and complex fills from Minneman and Beller playing pumping lines on his bass. 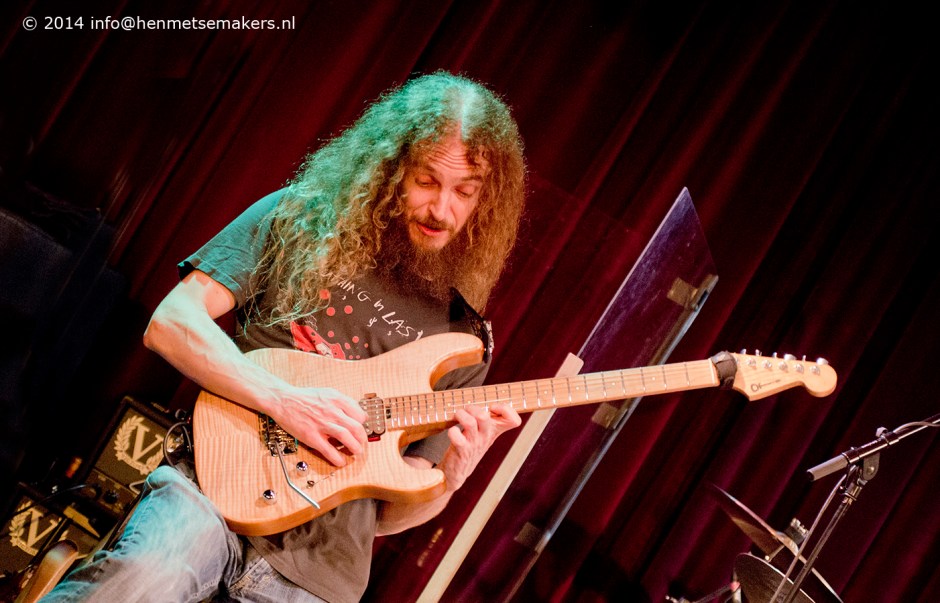 ‘Louisville Stomp’ was originated in Louisville Kentucky and has an Brian Setzer Rock ‘n Roll atmosphere over it, with, indeed, humoristic and parodic passages. After this a-typical Aristocrats tune Guthrie Govan introduces his tune ‘Get It Like That’, starting very easily and developing towards a real heavy metal tune. Also here some additional entertainment: musical participation of two plastic pigs and a chicken.

Govan’s title song ‘Culture Clash’ was drawn from a band joke based on a scene from the movie Serious Man. A movie they watched in their small van on tour and they took over the culture clash gesture during the tour. An appropriate reason to name the CD after this scene. What makes the performance of this song especially interesting is the trio constantly is trying to pull the leg of the audience by changing chords unexpectedly or just stop after a major chord. 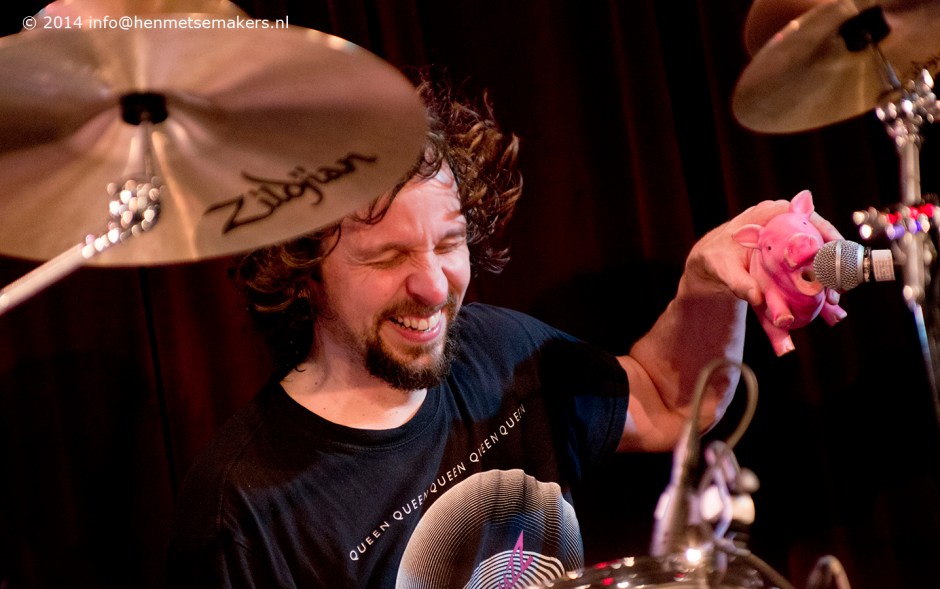 This became even more explicit during the parody on blues music under the name ‘Blues Fuckers’ with which Marco Minneman aimed to ruin an entire music genre. Interesting detail here: the name of this song  earned the CD a parental advisory sticker. Pretty unique for an album without lyrics … Listening to this song sometimes make you feeling drunk and stepping on the wrong foot. Very original and funny. This song segued into a extensive drum solo in which Minneman also used the ceiling and other elements of the Paradox venue. The way Minneman interacts with the drums is so energetic, varied and present it made enormous impact on the audience. And with an constant smile on his face also. 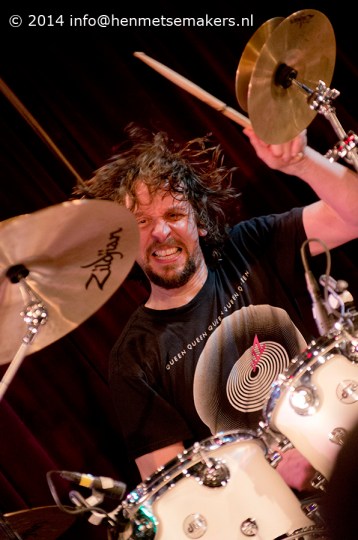 e Govan injured his head seriously but didn’t had time to visit the doctor because he had to write a song and didn’t want to loose valuable recording time … This tune blasts in variety in chords and basslines and could cause a head wound when head banging on this tune.  By the way: only Govan’s dry English humor would be enough to value this tune.

The only ballad in the band’s repertoire is ‘Badlands’  and together with ‘Desert Storm’ the only two songs based on mother nature. The latter one was inspired by Marco Minneman driving almost directly into a tornado. This song starts with a tornado drum solo and pumping heavy bass. Govan describes the curling wind and storm with fierce guitar lines sometimes reminding on Robert Fripp.

Before playing ‘Living The Dream’ Beller explained in a humble humoristic way that being a musician is awesome and awful at the same time. Basically he resumes it all: working hard, having fun, disappointments and continue with their passion: creating and playing music whatever it takes. Listening to this song and taking Beller’s story into account I can feel all the successes and failures of these musicians through this song.

A very nice closing of an excellent evening of high level music and entertainment. Big chapeau for these men living their dream. With performances like this one at Paradox the dream of these musicians becomes more and more fulfilled. Looking forward to the next step. 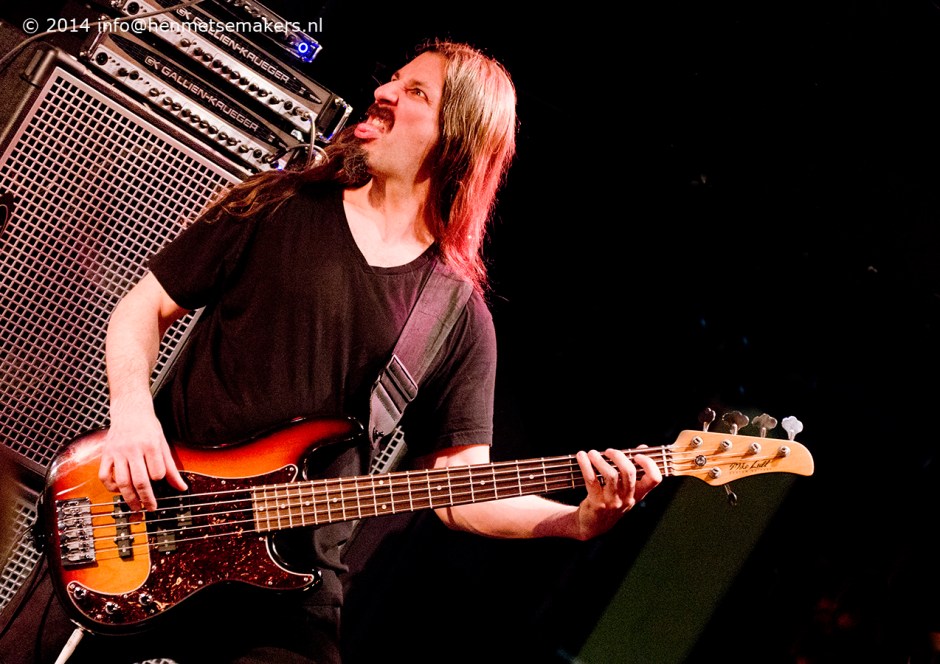 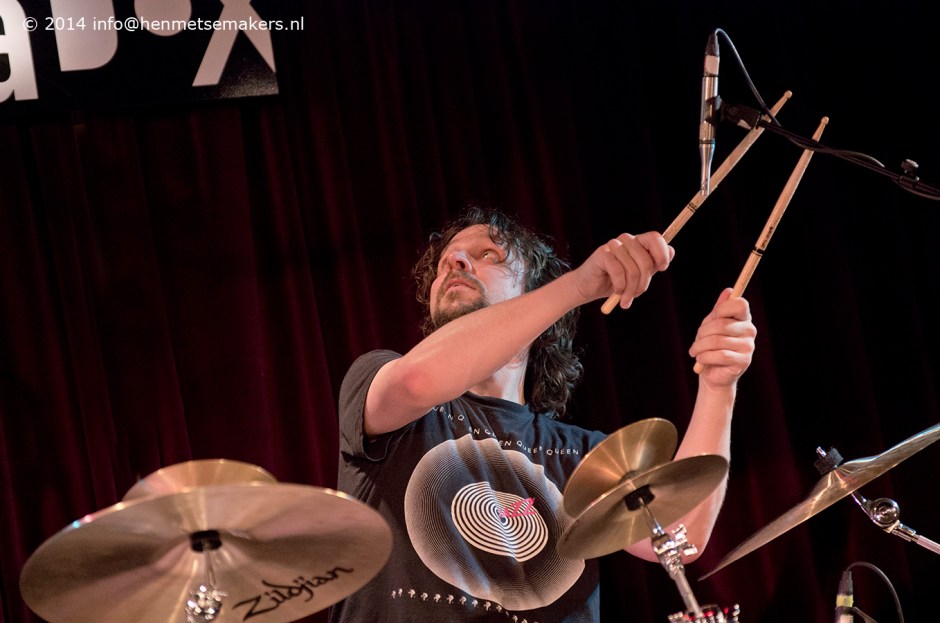