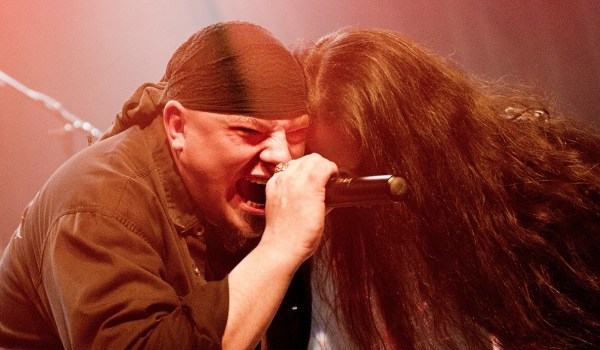 Lalu played in the Bosuil  at April 26, 2014. Review by Frank Hurkmans and photography by Hen Metsemakers.

On Friday 26th of April we were part of a devoted group of music adepts listening to the first concert of a small tour of Lalu. Lalu is a studio project directed by Frenchman Vivien Lalu. Lalu cooperates with top-notch musicians from the progressive metal scene based upon long lasting friendships and mutual respect for each other talents and skills. But creating a CD in the studio is something completely different then performing complex progressive compositions on stage. And getting the band physical 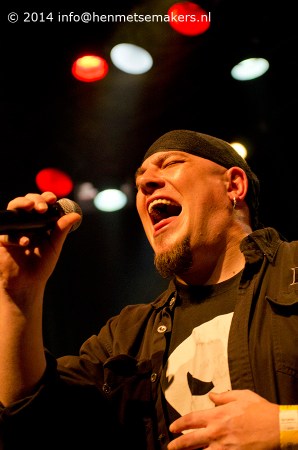 together with these kinds of musicians is also a big challenge looking at the full agenda’s these artists normally have.

The most recent studio CD ‘ Atomic Ark’ (2013) from the French keyboard virtuoso Vivien Lalu was very diverse received and ranked in the progressive metal community. Main reason for this is the diverse styles exposed on the record and relative short songs. Some called it a master piece and others concluded it as an album without coherence and songs who are too short. At all fairness, I am not a prog metal expert; however after listening and trying to understand the concept behind CD my conclusion is Atomic Ark is a musical rich and conceptual album. The main theme is that human mankind was overplayed its cards and it’s time to pay back some debts to the earth and other species. And the diverse music and lyrics on the songs underpin this message. What is very striking and honorable is that Vivien Lalu donates parts of the royalties from the CD to animal health and rescue organization ALERTE-SOS. Hats off for mr. Lalu for this idealistic and sympathic gesture.

Besides Vivien Lalu on a 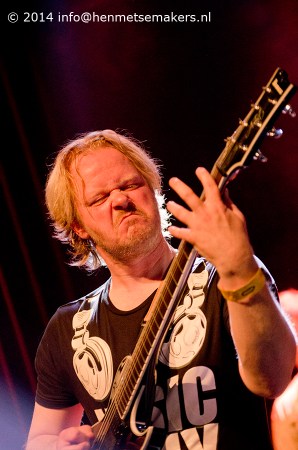 Roland keyboard the band for tonight consists of a ridiculous strong rhythm section: Mike LePond on bass and maybe the most innovative drummer in the scene Virgil Donati. And on guitars Simone Mularoni and one of Europeans best kept secrets on guitar Joop Wolters. Martin Lemar takes care of singing the often beautiful verses. And the gig tonight is the first ever for this band of musicians.

During the show the band played a combination of songs from ‘ Atomic Ark’ and the first high acclaimed CD ‘Oniric Metal’ (2005). The concert starts off with a brief piano introduction of ‘Revelations’ in which Lalu immediately shows his lyrical and compositional skills.

One could argue if a band with these musicians needs a vocalist, because they are able to play instrumentals for hours. But after the first verses of ‘Greed’ it became apparent the way Lemar takes care of the lyrics this is an integral part of the songs and creates focus. With ‘ Greed’ the whole band showed immediately their intrinsic musical power. Wolters proved for the first time tonight his skills on the axe by firing off several complex shreds accompanied by the pushing rhythm section including Mularoni. This was a hell of a start. The band throttled back with ‘Yesterday Man’ with a prominent role for Lemar and nice odd breaks. Watching this band you would not expect Vivien Lalu to be the genius of this music. Lalu prefers a role in the background enjoying the live performance of his compositions and delivering his part of music. ‘Bast’ starts with a typical string based keyboard introduction before the band plays lots of breaks and Donati crushes through the tune with inimitable patterns on the drums. Donati is responsible for lifting this song to a high level.

On ‘Timestop’ Wolters showed he has highly intuitive capabilities and can improvise on the spot just translating his mood from the moment into musical patterns. Vivien Lalu served keyboard waves on which Wolters builds. I have to admit some of Lalu keyboard arrangements sometimes remind me on his country fellowman Jean Michel Jarre. 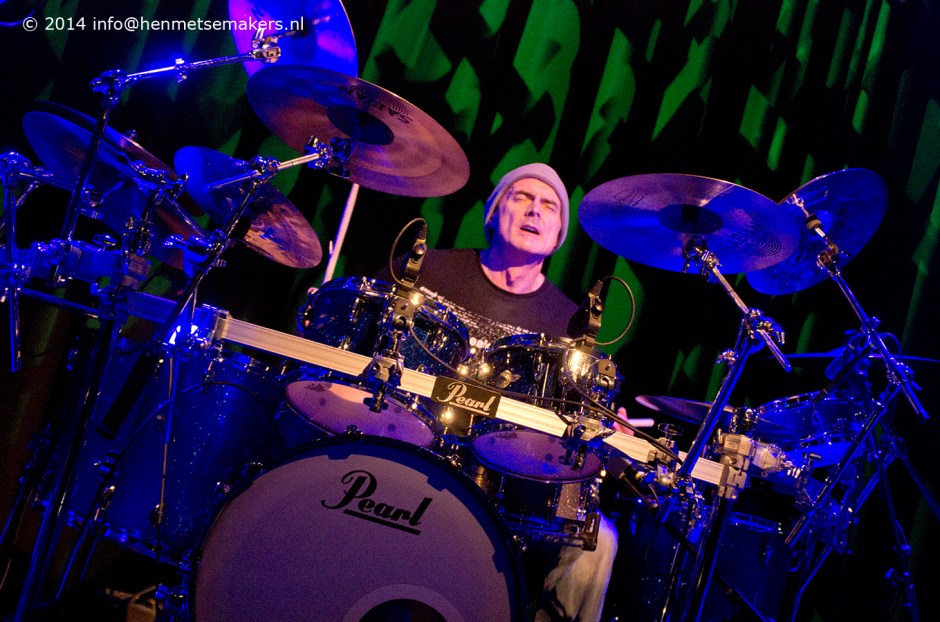 With the performance of ‘Starwatcher’ the whole band proved they have completely internalized the prog metal idiom. Playing this tune the band shows both rhythmic and melodic ingenuity including improvisation and very complex breaks. You would not believe this is the first performance of this band.  ‘Wolves Eyes’ starts off with a great guitar solo by Wolters. I can imagine he is very thankful playing with this known bunch of musicians because they bring him in the position where he really shines. And for the rest of the band Wolters must be a great musician to play with.  Lemar warns the audience not to be afraid of the scaring lyrics introducing ‘Slaughtered’; a tune with claustrophobian keyboard sounds. This tune is a nice example of how music, voice and text can be combined to one creative form of art.  ‘The Big Hunt’ develops in a rap like song and is played very tight. 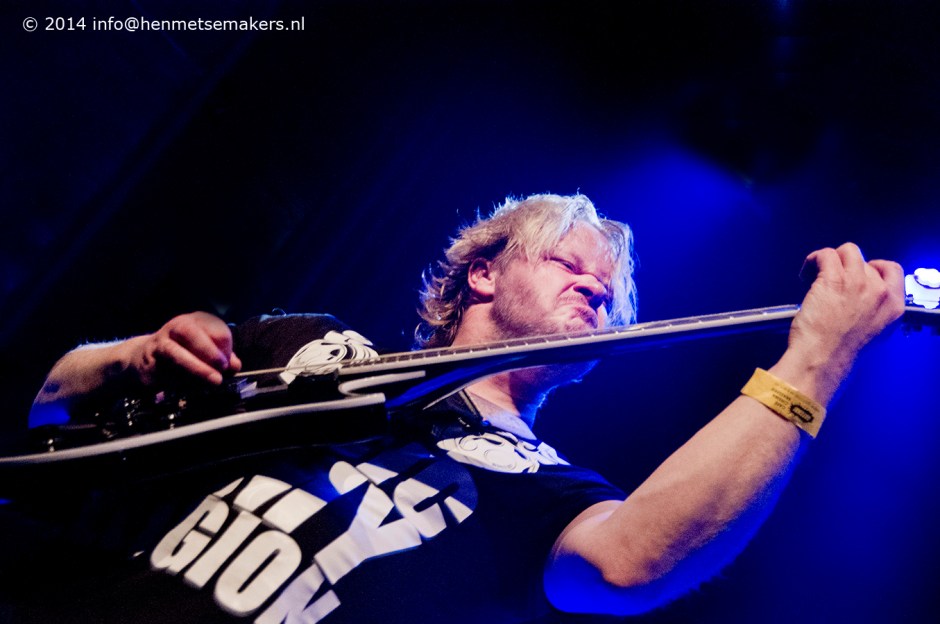 After all this teamwork the spotlight was on Virgil Donati who improvised on his extensive drum kit and proved why he is one of or maybe the most modern innovator on the drum kit. After the drum solo, the band started after a short hesitation ‘Momento’ which developed itself into a very, very groovy and swinging tune. ‘Tatonka’ started with a fat bass pattern and put Mike Lepond into the spotlights.  The concert closer was ‘Sick Of Your Lies’ / Call To Arms’ being part IV and V from Revelations; a very 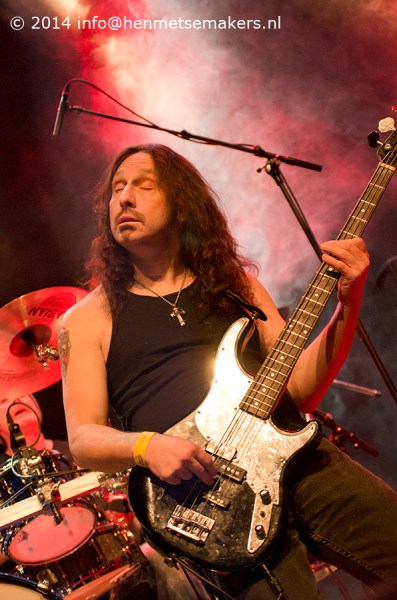 complex and intriguing composition in which every band member was able to show again his skills.  Lalu provided the happy few who were present with an excellent musical show. A show in which Joop Wolters grabbed the opportunity to show and shine in a band with real prog matadors. Chapeau to Vivien Lalu to bring this band together and having made it possible to have this complex music played live on stage.