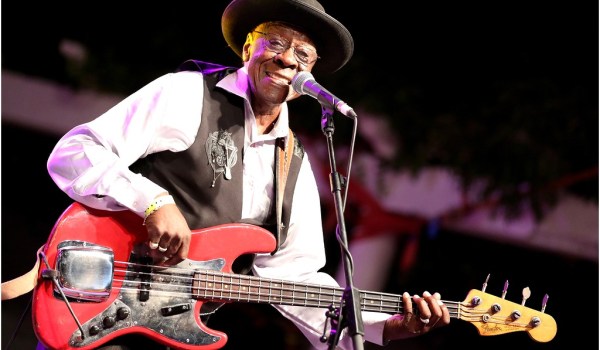 Special report by Nicolette Johns with photos (click here for pics day 2) by José Gallois of the 3-day Internationacional Blues Festival of Mijas 2014. [Also read the reports of day 1 and day 3] 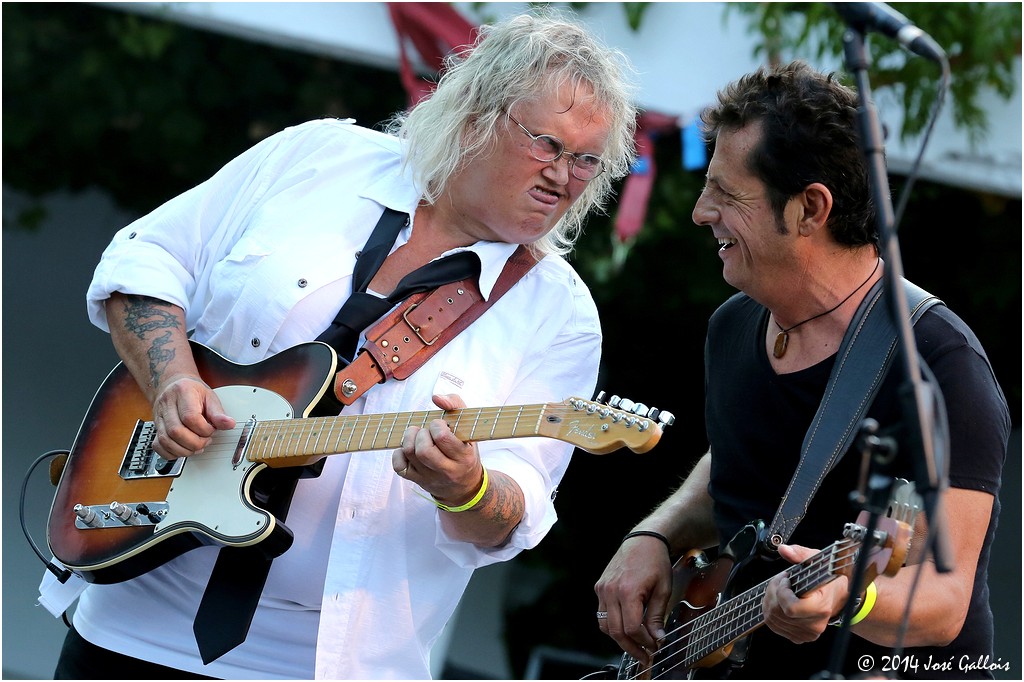 The second day of the 8th FIdBdM is opened by a band from nearby Malaga, Mama Paula Blues Band. We, The Blues Alone?, have seen her preform at the bandstand the same festival in 2008 but this time she’s performing the main stage. Might I add, that the past years have matured here performance. It’s coherent and well balanced, she houses a fabulous guitar player Marcelo Sainz. 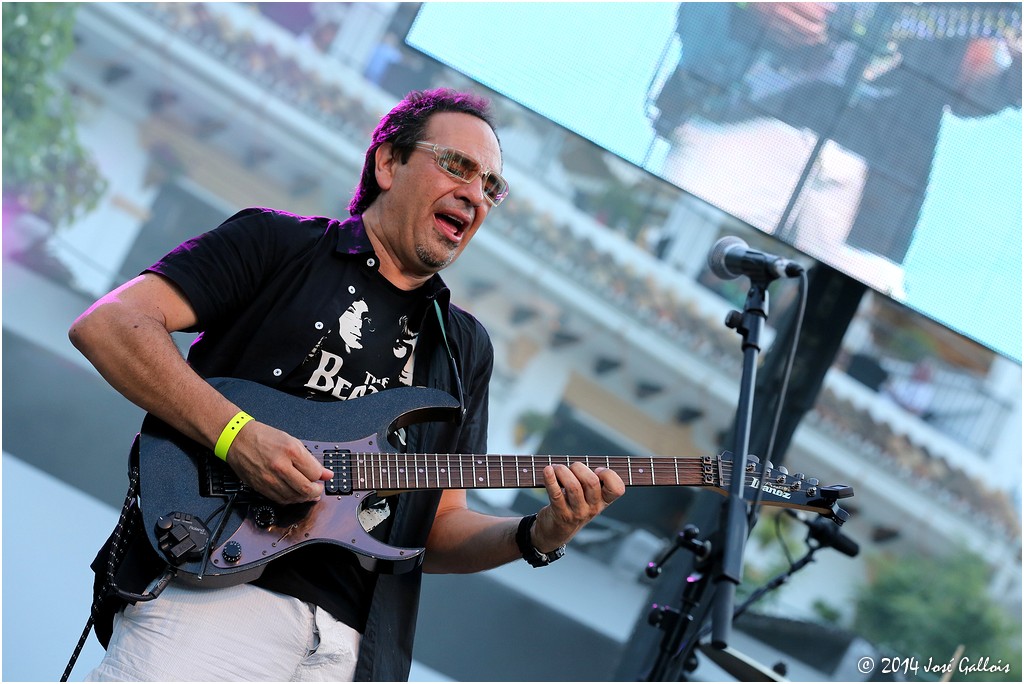 ‘Stormy Monday’ was and still is on Mama Paula’s set-list, and so it should! One of the songs which she performs here today is ‘Nobody Knows Better Than I’ written after the passing of her mom and dear friend Maggie Ross. It’s a moving performance I must admit, she sings it very subdued. Unfortunately her Swedish friend, of whom I didn’t catch the name properly, is appearing very nervous which doesn’t help his performance. Paula pumps up the rhythm with the female version of Hoodoo Voodoo Woman, well done but if baffles me why she didn’t take the option to perform Koko Taylor’s ‘Wang Dang Doodle’ . All songs performed feature solos of Paula’s guitarist Marcelo Sainz. As does ‘Trouble In The City’ which starts of as a ballad but turns quite surprisingly into a rocking blues song, terrific!

The Lito Blues Band starts of with a very jazzy sound, most likely inspired by Ronnie Earl. This band which originates also from this region starts of with the fifth (!) rendition at this festival of ‘Hoochie Coohie Girl’, which displays the vocal skills of New York singer Suzette Moncrief at it’s best. ‘Malagenos’ José Fernandez Lito plays the guitar and Jorge Blanco plays the 5-snare bass in the band and Swiss Nicolas Huguenin is the drummer. Second song on their set-list is one by Stevie Ray Vaughan – ‘Tin Pan Alley’ .

Lito plays a mean riff now and then; the rhythm section is apparently enjoying themselves which translates into an irresistible good vibe. The Blues Alone? reporters are very impressed with the professionalism of this band, moreover their singer Suzette Moncrief. The audience only emphasizes our opinion by cheering for an encore which is rewarded with Etta James’ ‘Blues Is My Business’. 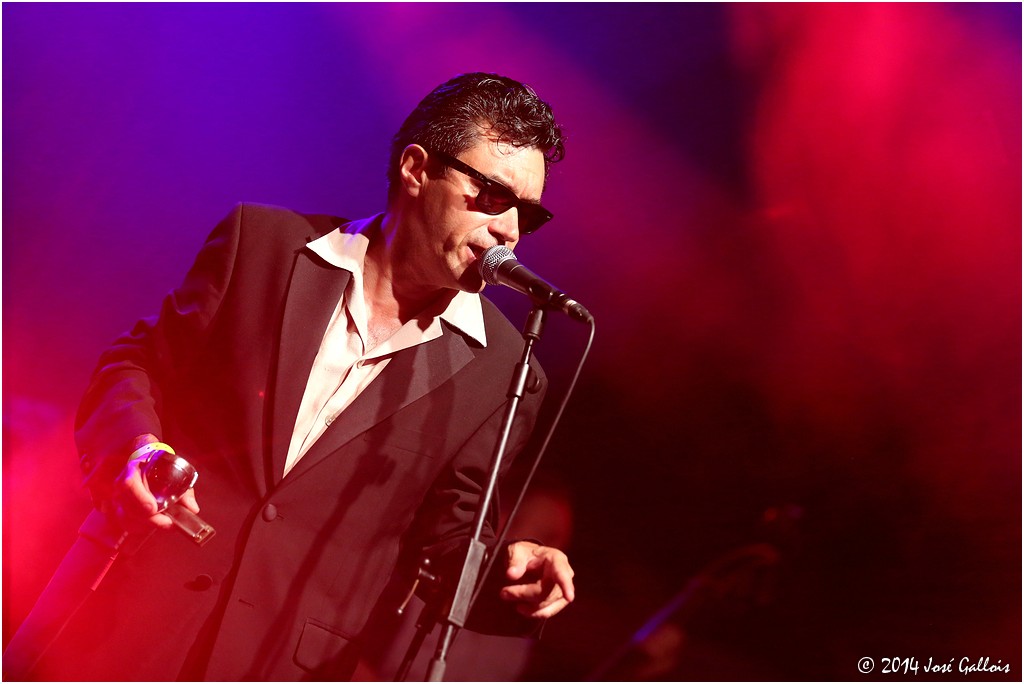 Next band has been a part of the FIdBdM’s line-up for many years now and can almost call Mijas Pueblo their home-base outside the UK, Steve ‘West’ Weston is about to get us up and dancing with his Bluesonics! Frontman, singer and blues harpist Steve Weston has new member in his band, Dane Ronni Busack Boysen on guitar. Ronni Busack Boysen is, according to Steve’s introduction, for the first time ever in Spain and loving every minute of his stay. To get the crowd into the right mood Steve opens with ‘Chicken Shack Boogie’ to which many-a-Spaniard can join in singing, followed by Bo Diddley rhythm influenced own song ‘Should Have Listened To Your Mother’. Steve’s set-list is covering, rhythm ‘n blues, swing, rumba and some Chicago beat. Steve’s vocals are outstanding and his blues-harp is uplifting; Steve is the master of the high tones, goose bumps! Upright bass player Orlando Shearer is dancing with his instrument, having fun when performing mùst be their slogan! 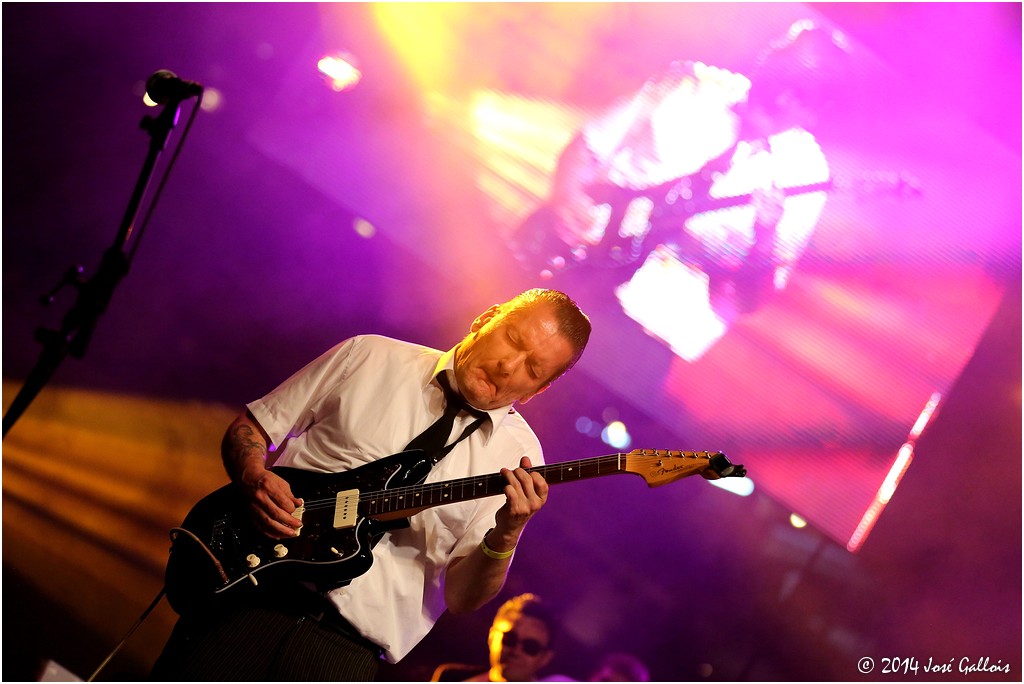 Ronni Boysen’s slide skills slides the crowd straight down the hill to ‘Fuengo’, his loving touch to the strings is overwhelming at times and he’s a great asset to the band! For his ‘groupies’ from Essex Steve plays a fine rendition of Joe Liggins’ ‘Pink Champagne’ where his followers act as the chorus. A great set by a fine selection of musicians. 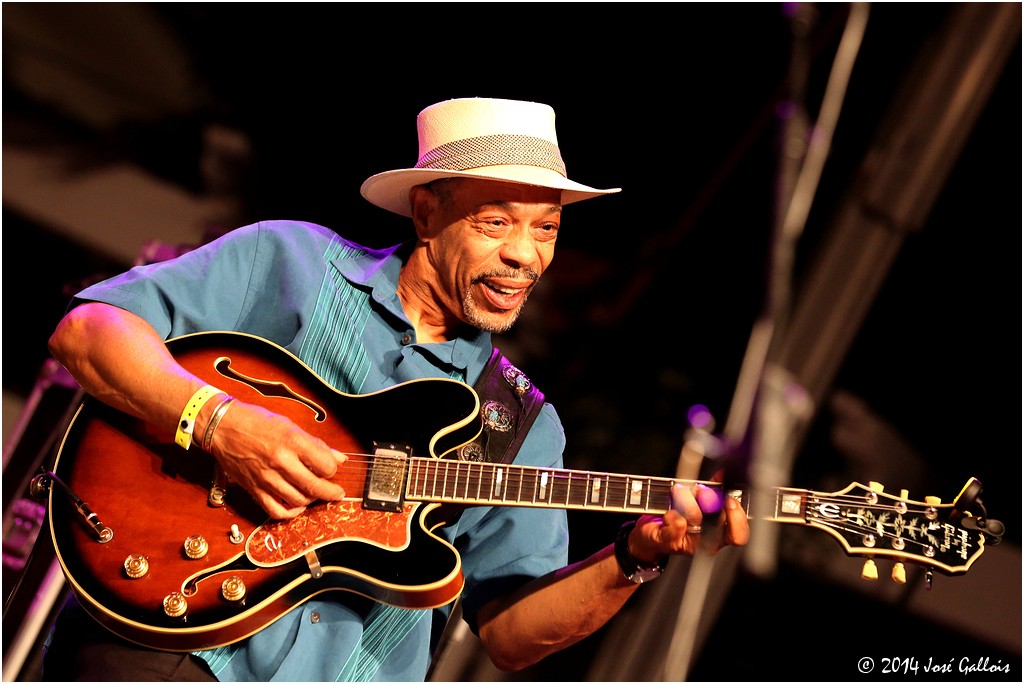 Not just only for the first day of the FIdBdM Kevin Hillier has succeeded to contract a major American act but also Saturday’s main act is one to be very proud of. John Primer and Bob Stroger are about to steal away some Spanish hearts! 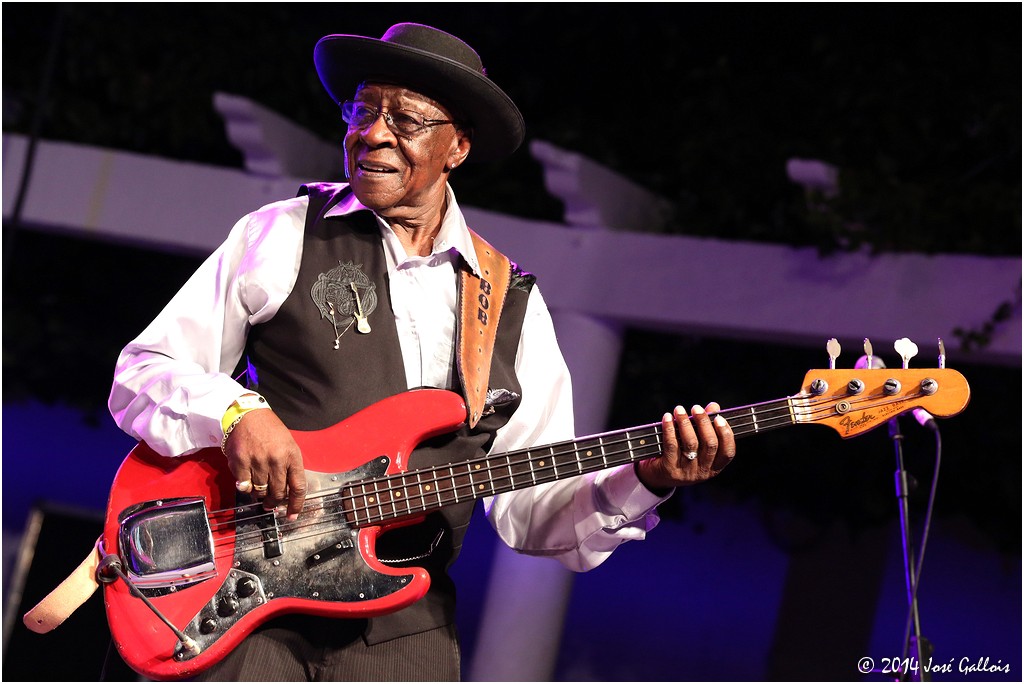 Bob Stroger (1939), winner of Best Blues Bassist Award in 2011 & 2013 is co head-lining with guitarist John Primer (1945). These two fine musicians are accompanied by Italian Luca Giordano on guitar (Epiphone) and Spaniard Quiqué Gomez on blues harp, this combination is not a random one. 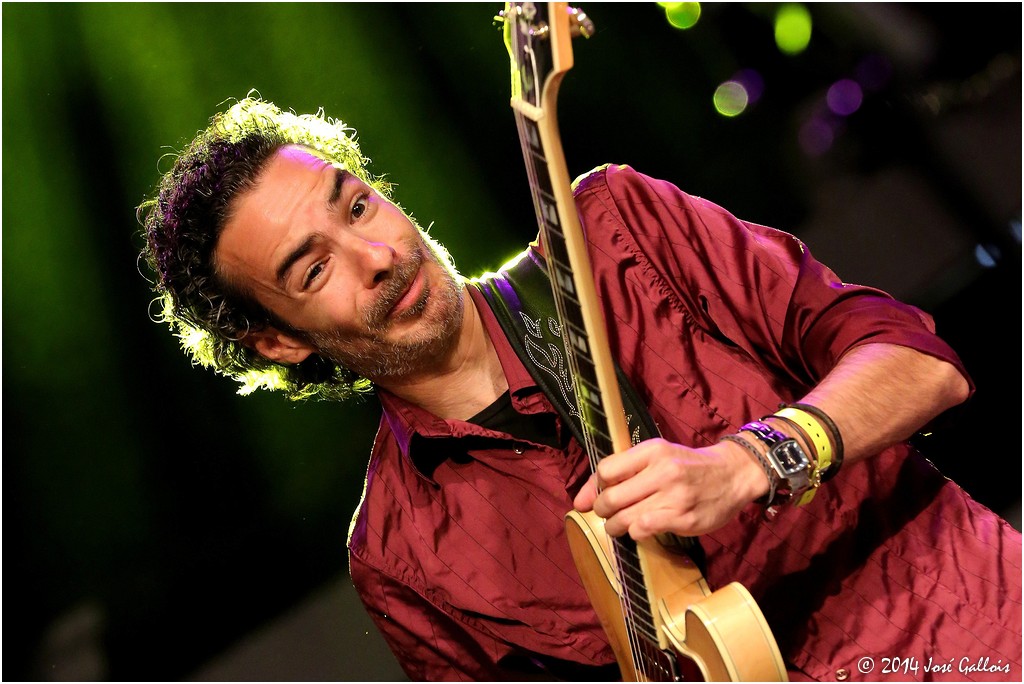 Both Europeans separately form each-other decided at one point to go to the Mekka of blues music, Chicago, were the two men met. After many jam sessions, meeting major blues musicians, cutting an album was the obvious thing to do. The album ‘Chicago 3011 Studio Sessions’ is featuring ‘new made’ friends, such as Jimmy Burns, Eddie C. Campbell, Billy Branch and Bob Stroger. In order to promote their 2013 released album these four fine musicians are toruing Europe. Magnetic Bob Stroger is on first with a little jump for joy he asks the audience if they are ready for some genuine blues, of course we are Mr. Stroger we’re especially here for you…….Bob opens with ‘Talk To Me Momma’ and his performance is enchanting to many women present, Bob Stroger the 75 year old ‘Bad Boy’! A few more songs before John Primer takes over the singing. John Primer is despite his impressive tourschedule in top shape. One virtuoso guitar lick follows the other, all played on his unmistakable Epiphone, his vocals are outstanding as usual. Luca Giordano who already captured my eye and ear when he was on this same stage with Peaches Staten in 2008 is playing a wonderful set, he obviously has improved his skills in the ‘Windy City’. Quiqué Gomez blows a mean Mississippi Saxophone much to the appreciation of the crowd. 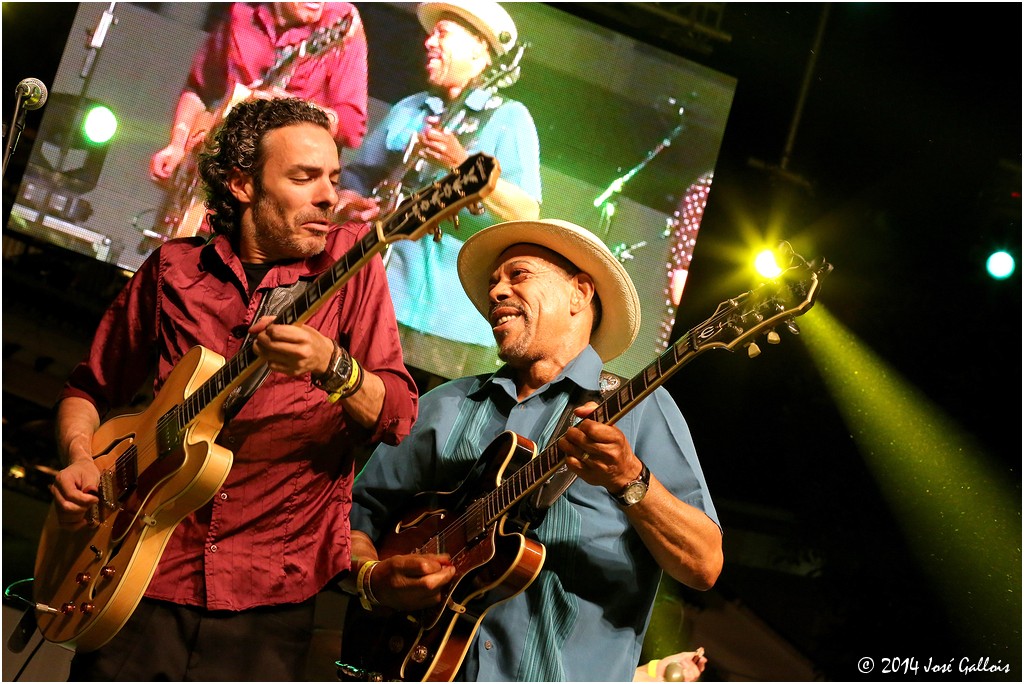 Fun to see how John Primer challenges the two men musically; this is the way to become a great performer learning from legends in music! When Primer breaks a string, Luca takes over with Bob Stroger who is still enjoying himself to the max. When Bob Stroger sings
‘So Sweet’ he steps down from the stage to sing to all the lovely ladies gathered around. 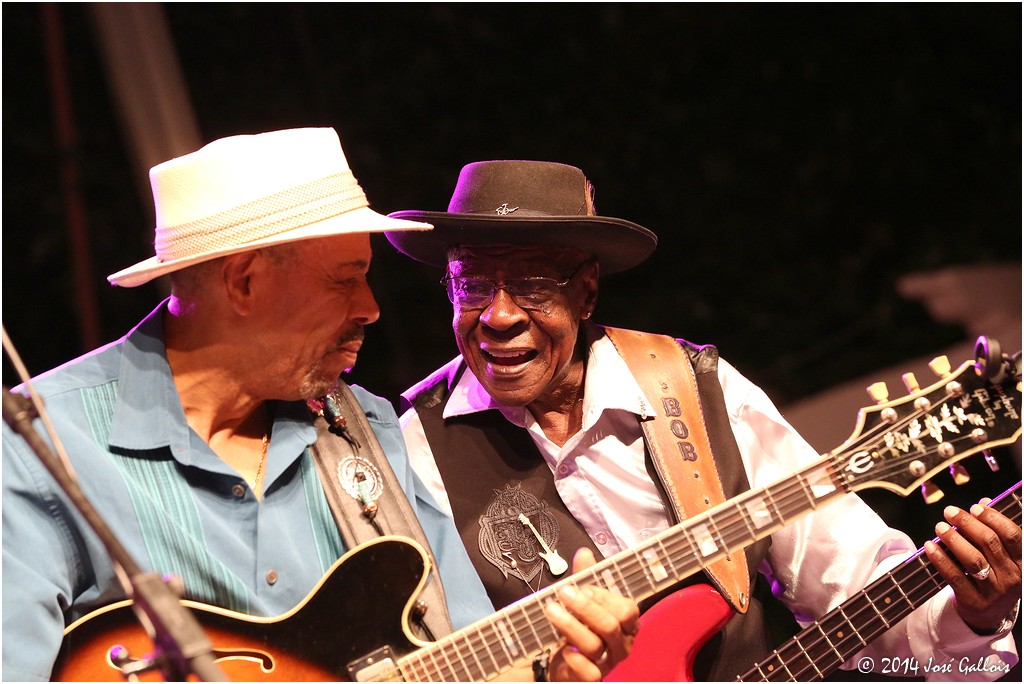 Meanwhile John Primer has taken his Airline guitar to treat the crowd to another slide but unhappy with the sound he switches quickly to his Epiphone with which he, while tuning, shows the audience once more why he is the slide-master of the blues scene of today. One of the latter songs in this set is ‘Hoochie Coohie Man’, though great, it’s the sixth time we’ve heard this song this week-end. Fantastic set from a bunch of fantastic musician with great charisma. 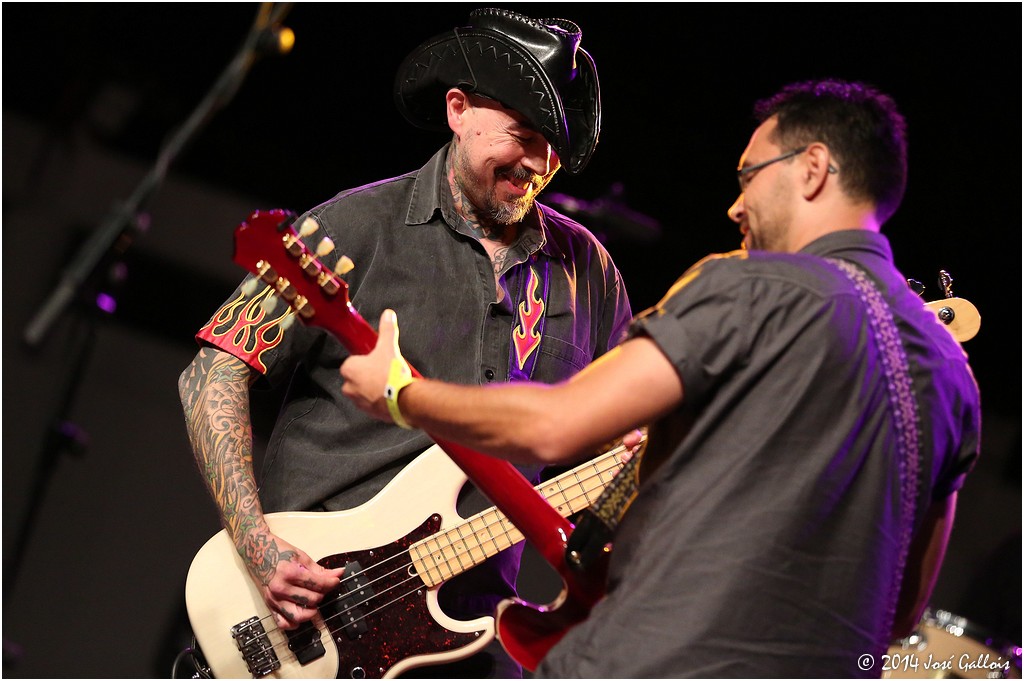 The Gangberries are the ones to close of day two of the 8th FIdBdM, and how surprising they are! This band which holds two guitarists and singers Felix Jimenez and Fran Pacheco are accompanied on drums by Juan Moreno and on bass Antonio Profe. The band plays a mix of covers which varies from Stevie Ray Vaughan, The Black Crowes, Lynyrd Skynyrd, Muddy Waters (6th rendition of Hoochie Coochie) and The Allman Brothers but also Little Richard’s ‘Good Golly Miss Molly’ is one of the covers played here tonight. 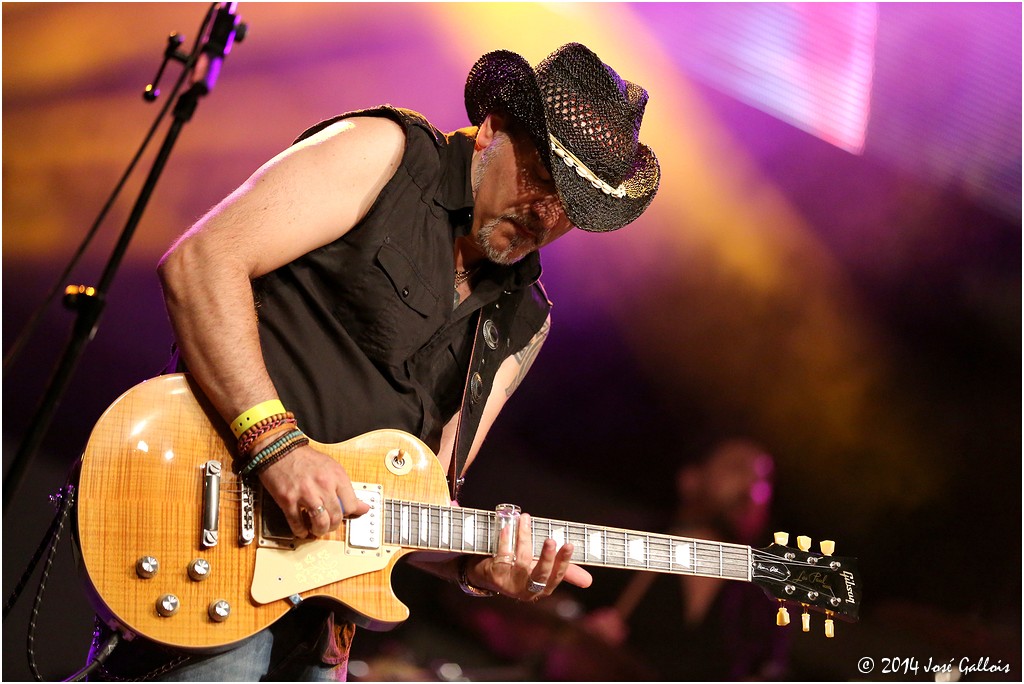 The reporters from ‘The Blues Alone?’ are flabbergasted by the skills of guitarist Fran Pacheco, they way he plays his Gibson is outstanding! Felix Jimenez is trying hard but I’m afraid that he’s too nervous to actually enjoy himself here on stage, unfortunately it influences his performance. Also his vocals are being infected by the lack of his English capabilities; he doesn’t understand all lyrics which results in bad pronunciation. All and all a good performance partly because of ‘stage animal’ Fran Pacheco and his partner-in-crime Antonio Profe. 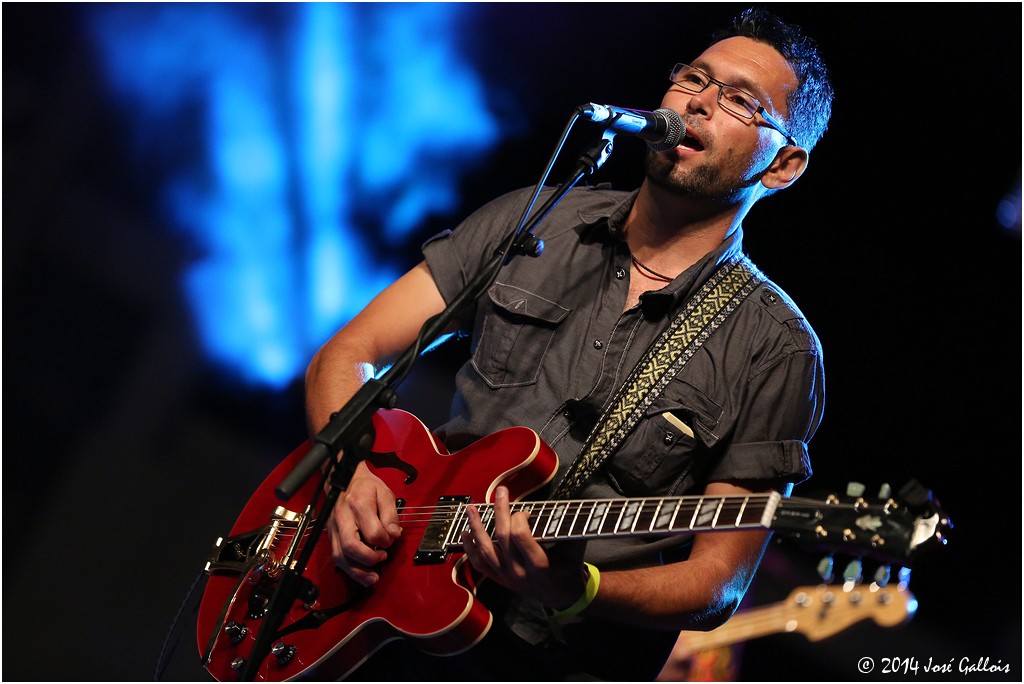