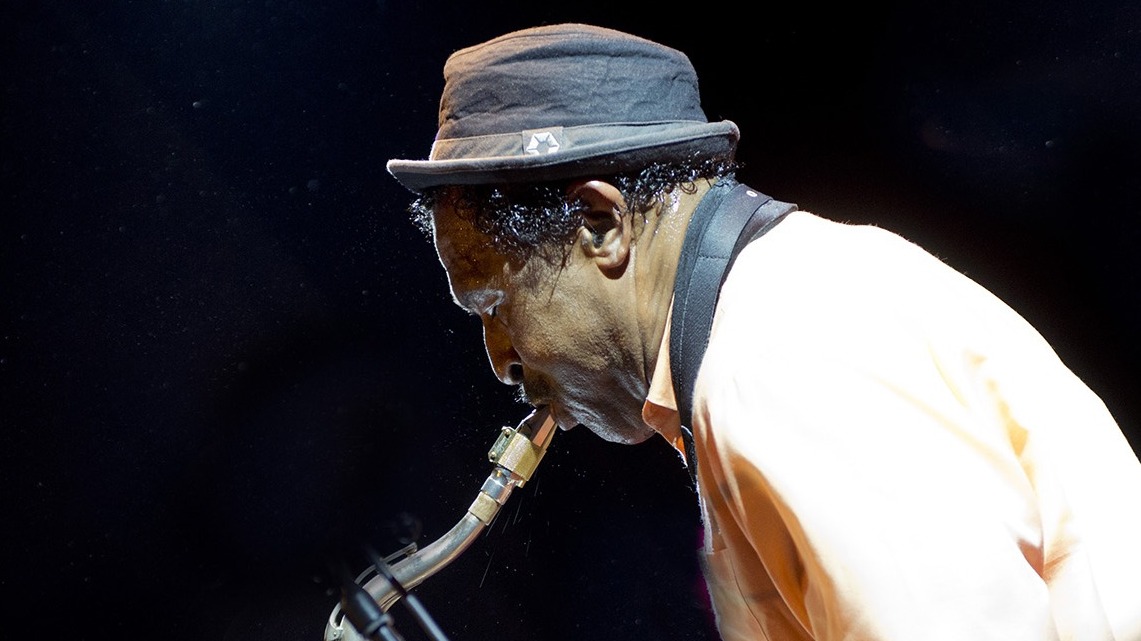 The Grandmothers Of Invention played at De Bosuil, Weert with support of The Blues Hunters at April 21, 2013. Review by Frank Hurkmans with photography by Hen Metsemakers.

We have been looking forward to todays concert for months; The Grandmothers Of Invention (GMOI) back in Weert! As long time admirers of the music, humor and theatre of Frank Zappa something we of course are not allowed to miss. We have seen the GMOI several times and every time we were energised and surprised afterwards. Last time the GMOI visited Weert was in February 2012. That show was recorded by Co de Kloet (Dutch Radio6) and broadcasted completely on

Mothersday May 13th 2012. Question upfront could have been: why the heck should we go, see and hear them again? For us this is a no-brainer to be honest: Core GMOI members Napoleon Murphy Brock and Don Preston are for us, besides Frank the man himself , important co-founders of the music from The Mothers Of Invention. And also important to mention: they are very humble, humoristic and accessible personalities who take the time to have a chat with fans from all ages.
Preston and Brock always are accompanied by very gifted musicians. On this tour long time member Chris Garcia plays the batteries. Besides his own trademark Garcia mastered many styles from former Zappa drummers like Aynsley Dunbar and Chester Thompson and is inspired by many drummers,  hand percussion and mallet influences. Garcia is a very dedicated long time tabla player and mentions on his website that his teachers have left an indelible impression on him as men, as musicians and as teachers. “I gratefully and humbly acknowledge each of them for their their compassion, selflessness, and PATIENCE with me and profoundly apologize for any of my inadequacies”. That’s a humble statement and that’s how Mr. Garcia is approaching the drums. On electric guitar the knowledgeable Michael Miller. I quote here Tom Meek from LAJazz.com: “Mike Miller is known as a “guitarist’s guitarist” and is one of the most sought-after and respected players in Los Angeles. Miller’s resume includes his current stint as a member of Better Midler’s all-star band in Las Vegas, Chick Corea, George Duke, Vinnie Colaiuta, Yellowjackets, Brand X, Peter Erskine, Gino Vanelli, Burton Cummings, Mark Mothersbaugh and many others. Miller is one of L.A.’s hidden gems, with the ability to play multiple styles and in almost any setting.” Nothing to add … On bass the flegmatic young Dave Johnsen who played with many Zappa alumni and played together with amongst others Jan Hammer, Joel Rosenblatt, Chris Clark, Chad McLaughlin, Denny Walley, Gary Lucas. This line up shows very promising.

Support act: The Blues Hunters
The support act are The Blues Hunters, an act whose name doesn’t cover the music they play in my opinion. The Blues Hunters played a very versatile mix of blues rock with jazzy arrangements and unusual chord variations. Experienced drummer Taco Gorter showed to be a driving force with  varied styles and tempo changes which draw the attention from the audience. The rest of the band consists of  youngsters Elco Jongkind, Theo van Niel, both on guitar and Daniel Lottersberger on bass. Personnaly, I am looking forward to their first CD and development of the band’s untapped potential. The music has also a tapestry of Zappa influences. Be keen on this runner up band!

The Grand Mothers Of Invention: Humor goes  indeed hand in hand with music.
Before the support act could kick off the GMOI consumed almost one and a half hour for the sound check. This was a first proof of their professionalism, dedication and perfection. The GMOI kicked off with a blazing funky

performance of ‘Apostrophe’ giving Dave Johnsen the opportunity to show his skills in a fuzz amplified solo. Followed by brief solo’s on sax and drums. What a nice musical introduction of the band. And to set the (very high) standard for what was coming for the rest of the evening. Two examples of the classic cooperation between Zappa and Beefheart from ‘Bongo Fury’ followed the concert’s opener.
On ’Carolina Hard-Core Ecstacy’ Brock showed he is a total theatre one show man fully connected with his fellow musicians. Besides the vocal parts he visualises the lyrics in such a detailed and humoristic way that you can see the characters and events develop as described in the song. He shows a contextual way of mimics an actor like Robert de Niro could learn from…
The way drummer Garcia sang the Captain Beefheart lyrics on “Debra Kadabra’ was hilarious and playing the drums simultaneous was brilliant to me. Wow !!; and the band played all musical parts humorful and accurate as well including all tempo and structure changes. This was one of the many examples of Zappa’s music performed at its best. The audience responded unanimously positive to this great start. One of the interesting aspects of going to live concerts is the power of the interaction between audience, band and vice versa.  Besides myself you could see and feel the audience getting more and connected with the band on stage. This connection grew during ‘I’m The Slime’ with a smooth solo by Don Preston and a squint looking Brock. Brock challenged the audience what kind of vegetables on average the audience consumes before starting ‘Peaches En Regalia’ with a magnificent sax solo. Mister Miller accompanied the sax synchronous and after a while divergated in his own direction. I became aware the down to earth Mike Miller mastered all guitar parties above standard and enrich the guitar parts with own flavour and interpretation.

In a brief intermezzo Brock played the filosopher: as long as there is an audience the GMOI will continue touring. And the reason why they all look that vital is due to two elements: positive attitude and sex. Big laughs from the audience. After the Mother’s classic “Let’s Make The Water Turn Black’, during ‘Florentine Pogen’ the band showed they have arisen above these songs. Listening to this band felt timeless and that feeling was confirmed by other fans.

As an introduction to ‘Penguin In Bondage’ Brock shared his observation when they crossed the border there are that many sexshops near the roads… ‘This is an interesting country …’. After this song from ‘Roxy …’ my personal wish came true: the performance of ‘Village Of The Sun’, ‘Echidna’s Arf’and ‘Don’t You Ever Wash  That Thing’. Besides the album ‘Roxy & Elsewere’ is an deserter island disc for me these songs contain everything what makes Frank Zappa’s to unique. These songs were performed in all its absurdity, complexity and approachability without any error by the whole band. This musical banquette shows the history of the world from prehistoric until now in 15 minutes.  You hear and feel the mammoths walk through the woods in some parts. And already mentioned earlier: the dances, mimic and gestures of Brock emphasises this. This was a band peak performing.
After ’Sofa #2’ showing a very flexible and easy-going Miller on guitar it was time to play a representative part of ‘Burnt Weeny Sandwich’. On Stravinsky based arrangements combined with waltz and marches showed again this ensemble breathes this musical material from out of their pores. Mike Miller told me after concert “I started playing the solo on Frank’s way and I felt to transform it to make it more from myself”.  That’s what we actually saw and heard. Don Preston plays a very intimate solo on an Ipod (!) during this part of the show. He went almost crazy in his interaction with the audience and, I am not joking, the Ipod literally exploded in his hand but no problem; he immediately switched to his keyboard. Not to forget: Brock played a marvellous tune on his flute. And the rhythm section pushed the whole thing forward into several directions. It’s difficult to tell in words how I felt after these songs. I concluded after a brief discussion with some people from the audience: “if you have to die this is a beautiful moment to die hearing this heavenly music.”

As an unexpected and very curious and innovative way Christopher Garcia played a marvellous drum solo as introduction to ‘T’Mershi Duween. Garcia, as humble as he is, showed an unknown, at least for me, part of his genuine musicianship. Playing drum parts while singing Tabla based structures, synchronous and asynchronous.  This was really amazing. I contacted Mr. Garcia after the show for clarification: “I have studied and played North Indian Tabla since 1978 and the solo I did was an original composition, which I first recited then played, then recited while I was playing”.
The dessert of the concert was a combination of  ‘The Idiot Bastard Son’ and ‘San Bernardino’.

Looking back to this happening I have to admit this was the best concert I have seen from the GMOI until now. And from a musical perspective one of the best performances I have seen in the last few years. The GMOI promised to come back to Holland in August and I am looking forward to the reunion. My big concern: who will pick up the legacy at the moment these musicians quit or are not able to play these music anymore?
Very admirable is the band invited the audience to have a chat afterwards and provided the audience with the opportunity to acquire some goodies. Merchandise and meet and greet went hand in hand.  What would Life be without this music and their performers…?
Grandmothers Of Invention are:  Napoleon Murphy Brock: vocals, tenor saxophone, flute, dancing, stand up entertainment;  Don Preston: keyboard synthesizers, electronics, IPOD, magic tricks and vocals;  Michael Miller: electric guitar;    Chris Garcia: drums, percussion, marimba, and vocals;   Dave Johnsen: electric bass.