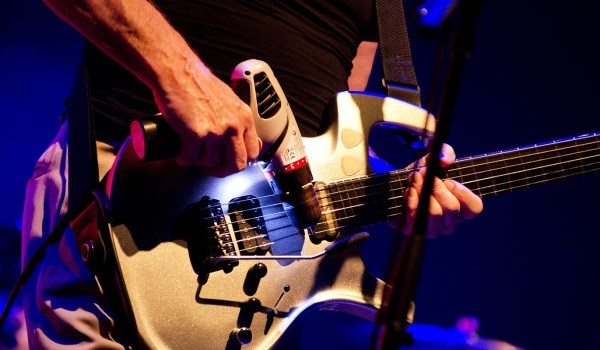 The Crimson ProjecKCt played at Parkstad Heerlen Theater at July 5, 2014. Review by Frank Hurkmans and Photography by Hen Metsemakers.

The third Dutch concert (the first one was at the Boerderij in Zoetermeer: read our report “The Crimson ProjeKCt speelt eclectische hogeschool Prog“) of The Crimson ProjeKCt world tour is in Parkstad Heerlen Theaters. It is our first visit to this theater. Arrival on the venue is very convenient; it was raining cats and dogs but the theater has a large parking facility under the theater building. The Limburgzaal itself has a kind of rectangular form with a pitch and a balcony. It looks very cozy with friendly people working in the bar. The start of the concert was 7:30; an hour early then planned due to the quarter final of the Dutch soccer team. That Theater Heerlen offers good service was proven by that every visitor was informed on time the concert would start earlier. And in the Theater’s café a large projector screen was installed to watch the match after the concert. And looking back at the concert: the sound of the concert was very good.  The Crimson ProjeKCt consists out of two knowledgeable musical trio’s: The Stickmen and The Adrian Belew Power Trio. They are touring to bring an homage to the music of the legendary King Crimson. 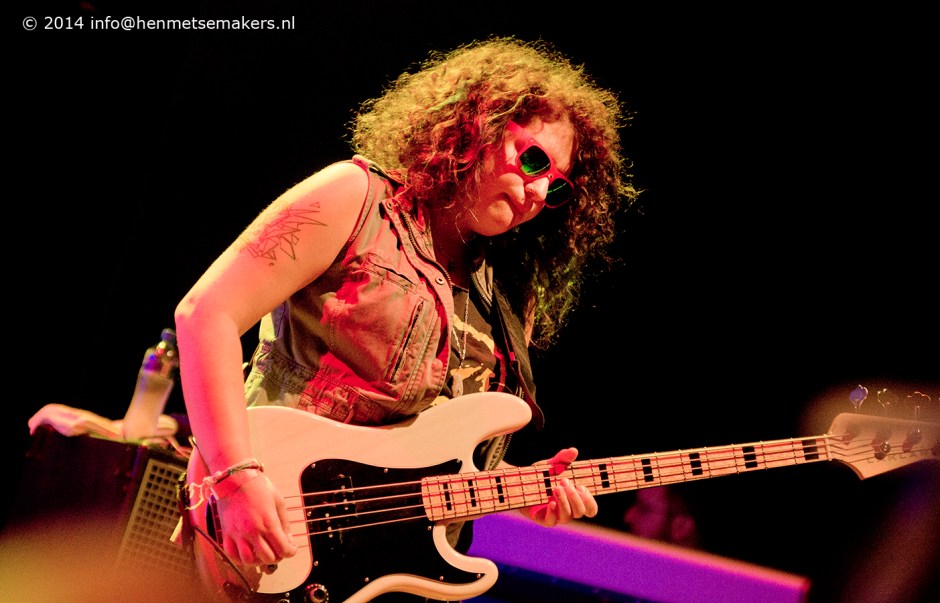 Tony Levin is a legendary, innovative and influential bass player who more or less introduced the Chapman Stick and made it known among the wider public. He also developed the concept of Funk Fingers, which are chopped off drumsticks as an extension of the fingers to play the bass guitar. Greatly inspired by Levin and student with King Crimson’s Robert Fripp plays the young German guitarist Markus Reuter. He also should be regarded as a master on the Touch Guitar. Pat Mastelotto is since 20 years prominent member of King Crimson and is known for its typical drum style in which acoustic and electronic elements play a very recognizable and broad role. 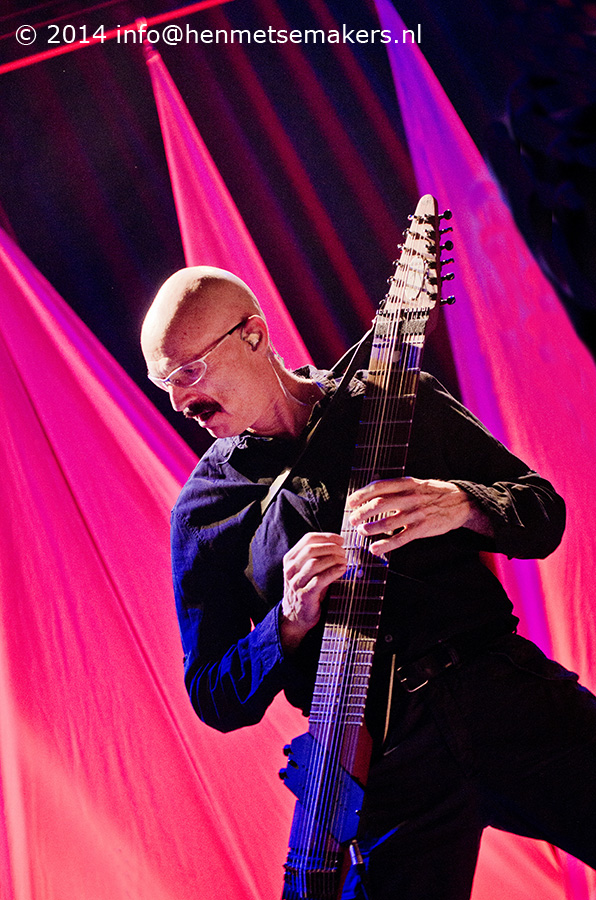 Adrian Belew is famous for its typical contributions to The Talking Heads, Frank Zappa and King Crimson. Beyond the fact that Belew is an excellent songwriter and singer he is famous to create all kinds of random sounds from his guitar. The band houses a relatively unknown bass player; Julie Slick. She turns the most weird and virtuosic melodic lines from her instrument. Slick, who was discovered by patron Adrian Belew, is also a part of the Adrian Belew Power Trio. The sextet is completed by Tobias Ralph. Ralph is a child prodigy who mastering almost all possible 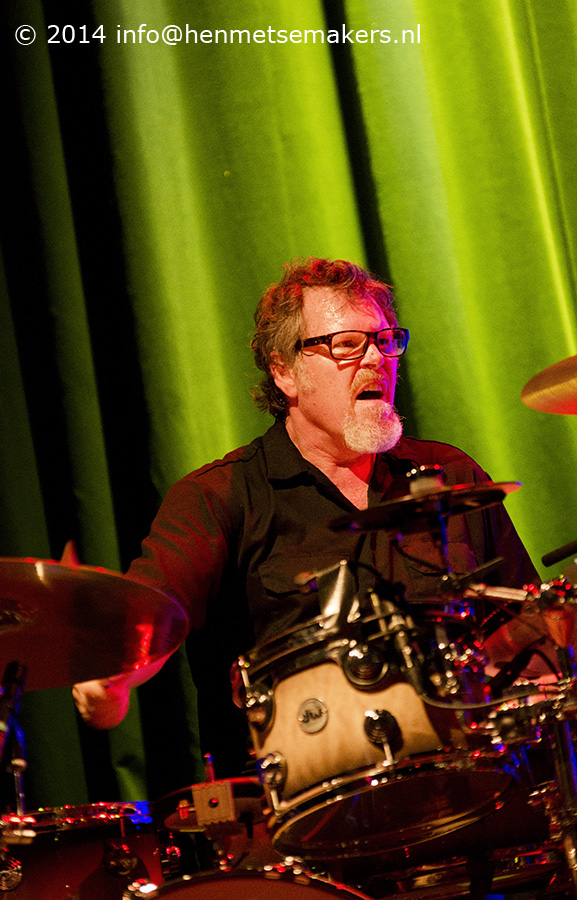 drum styles ranging from rock, speed metal and jazz and has this internalized in his own style.

Shortly after 7:30 PM Markus Reuter entered the stage to play a piece inspired by his brand new album ‘Sultry Kissing Lounge’ (July 5th). The album consists of interludes recorded during The Crimson ProjeKCt tour. This first tune immediately reminds to Frippertronics and the influence of Robert Fripp is clearly audible. With this 5 minutes introduction an esoteric atmosphere was created in the audience. The tune segues into ‘B’Boom’ in which the both drummers made their entrance with rolling thunder drumming and layers of soundscapes created by Reuter. Halfway the song the rest of The Crimson ProjeKCt joined the stage to bring the concert immediately to steam level.

After introduction of the ‘Thrak’ theme the band started an intriguing, playful improvisation in which it sometimes difficult was to determine which musician played which part. Belew’s usage of a handy battery driven drilling machine on his guitar was spectacular.   The sextet played three other King Crimson songs before the Power Trio continued. What became very apparent until this part of the concert is that Reuter is playing the complex guitar parts normally played by Robert Fripp with great ease. Tony Levin proved his interwoven mastership on the Chapman Stick with a very lyrical solo during ‘ Frame By Frame’. Belew was in a very good mood and had some interaction / discussion with some people in the audience. It was interesting to see that Belew created some tape loops to be used during the performance of ‘b’. During ‘Neurotica’ Julie Slick, who was playing her parts a bit on the background, claimed a more prominent role with interesting bass parts supported by a sublime drumming by Tobias Ralph. The trio created a real neurotic atmosphere with this tune.

The Stickmen took over the stick from the Power Trio and played the original ‘ Crack In The Sky’ with Tony Levin on lead vocals! Sophisticated drumming with deep sounds on the stick accompanied with soundscapes and fierce guitar work by Reuter created a beautiful atmospheric song. The Stickmen started ‘Larks Tongues In Aspic part II’ as a trio an half way the piece Belew joined to bring this complex tune to an even higher level and ending. However Levin’s Stick playing superb during the whole concert; here it was simply majestic. After the quartet played a light footed version of ‘Three Of A Perfect Pair’, Belew and Levin played a beautiful and tender version of ‘Mate Kadusai’. 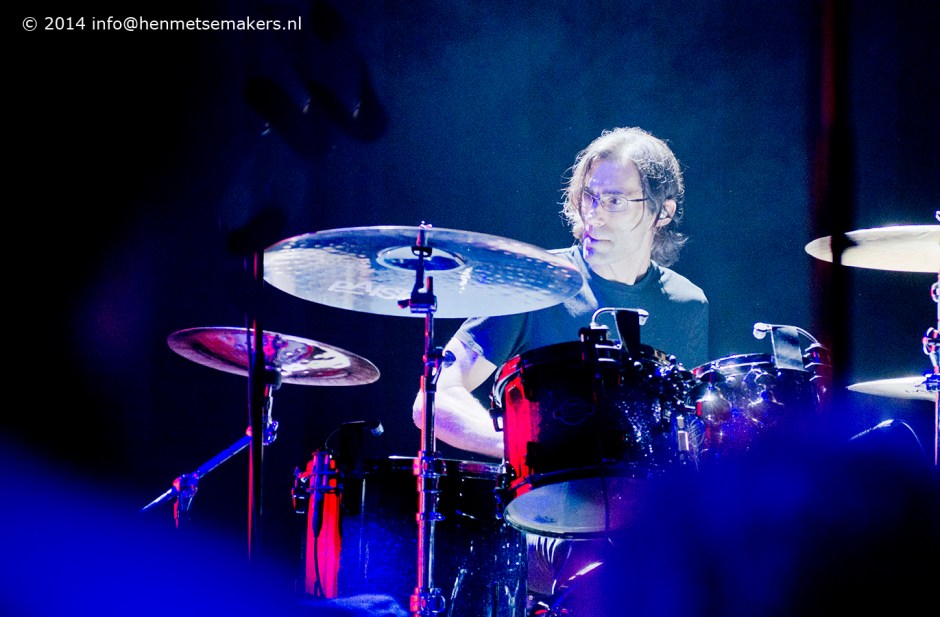 The Power Trio original ‘E’, for which Belew created again instant some tape loops, is a fierce rock tune with some brought far away memories of the psychedelic period of Gong in my mind. Very versatile drumming by Tobias Ralph pushed forward by Julie Slick’s bass playing.  Before the sextet entered the stage for the last part of the concert The Stickmen played a beautiful groove driven improvisation on ‘Open part 3 – Truncheon’ on which master percussionist / drummer Mastelotto used amongst other a 500 ml plastic bottle and a battery of electric percussion equipment.

Robert Fripp’s ‘Breathless’ was indeed a breathtaking performance and when you closed your eyes you would almost hear Robert Fripp playing live on stage. A big compliment to Markus Reuter, who besides his own musical development and style, in my opinion is a potential successor and legacy bearer of Robert Fripp’s unique styles.  After the ballad ‘One Time’ the Crimsons played a strong version of ‘Red’. ‘Indiscipline’ was introduced by a mind boggling drum duet by Mastelotto and Ralph.  The two encores ‘ Elephant Talk’ and ‘Thela Hun Gingeet’ were a worthy closer of a fantastic musical event. 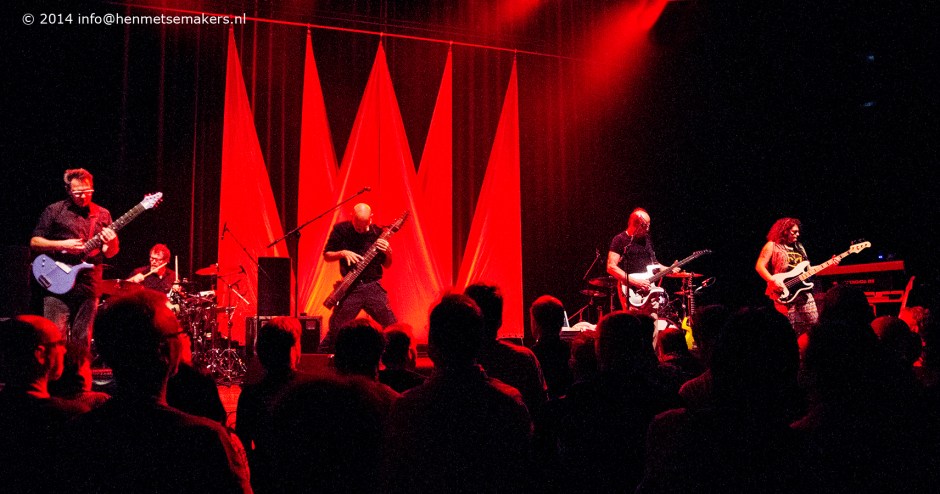