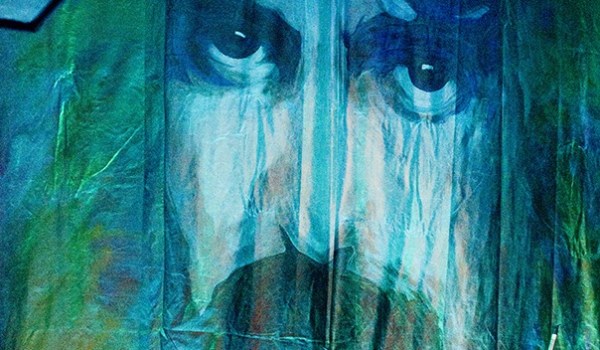 Banned From Utopia played at De Nieuwe Nor in Heerlen at March 25, 2014. Review by Frank Hurkmans, photography by Hen Metsemakers. 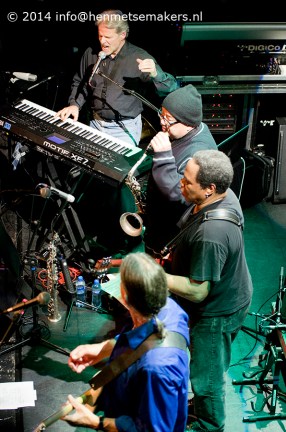 Tonight, March 25th 2014, we are for the first time in De Nieuwe Nor in Heerlen. Nieuwe Nor is a combination of a cozy cafe with a separate concert hall. Entering the café we hear two young disc jockeys play Captain Beefheart songs. A nice beginning of what became a fantastic musical happening.

Banned From Utopia (BFU) kicked off the 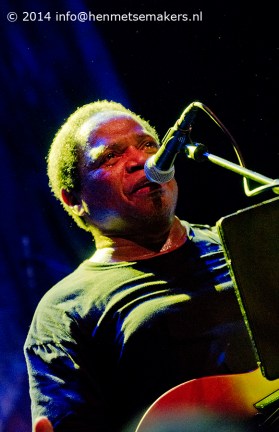 ir European Spring Tour with a very adventurous concert at de Nieuwe Nor. Dr. Robert Martin managed to organize 6 other Zappa alumni to start an extensive tour to celebrate Zappa’s legacy.  Looking at forehand to this line up we expected these very high skilled and experienced musicians are able to play the enormous catalogue of Frank Zappa. And to come directly to the point: this septet showed during a more than two hours show they live, love and have mastered both the ‘easy listening – rock’ songs and also the very complex pieces from Frank Zappa’s oeuvre.

At 20:45 300 music Zappa lovers welcomed the band. BFU started with a slow tempo version of ‘Chunga’s Revenge’ with a great use of the combination of French Horn and tenor sax. What surprised me was the virtuosic way pieces Albert Wing played here. Martin introduced the band as the ‘Rocking’ Teenage Combo and after the humoristic pop song ‘ I Ain’t Got No Heart’  with nice singing by Martin, Ray White and Arthur Barrow, the band was warm and started to work towards a first peak this evening. 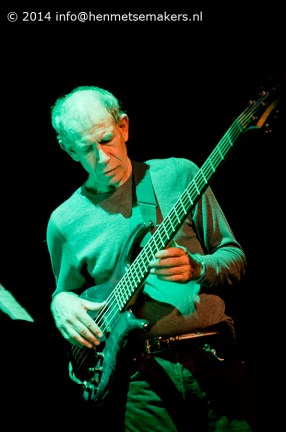 d into a brilliant performance of ‘Marqueson’s Chicken’. During this percussive and very rhythmic tune the tandem Chad Wackerman and Tom Fowler accompanied with furious percussion by Ed Mann. The original guitar solo was played on mallet. Personally I would prefer a rough guitar solo here but the Mann variant was very inspired and the duel between sax, guitar and mallets were thrilling. Wackerman proved again he has grown above the musical material. What a master drummer this guy is on which also seemed his birthday tod 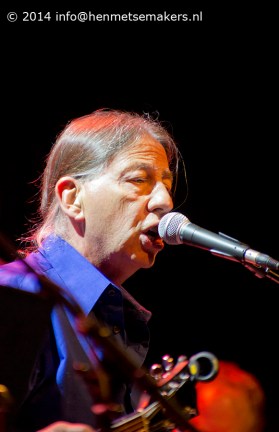 ay! And the keyboard layers from Bobby Martin filled this complex piece with marvelous keyboard layers.  ‘Society Pages’ could have been played and sung with little but more humor but again a big surprise by sax player Winger. To me Albert Wing appeared as the big unknown gem between his fellow musicians.

Time for the next peak:  after the first chords of ‘ Dupree’s Paradise’ I felt lifted into the air with again a main and passionate role for sax player Winger followed by a great improvisation on the keyboard. The drum bass combination here helped here to perform a fluid version of this very complex piece.  Bass player Tom Fowler showed him and his bass are just one. I have hardly seen a bassist touching and playing his bass with such feeling and finesse Fowler showed.

During ‘ The Black Page’ Fowler was also very strong connected to Barrow and the band bounced together through all the rhythmic changes. Martin and Wing dueled on tenor and alto sax which gave this performance a typical tension together with the melodies and sounds produced by Ed Mann.  Ray White showed a little more relaxedness during the hilarious tune ‘In France’. White, a great singer with a great voice, showed a little bit of absence during the beginning of the concert and was becoming more and more relaxed.  ‘Zomby Woof’ seemed to become of the absolute highlights of the evening. Ray ‘Woof’  White envisioned the creature and the tune was marvelous played in all its complexity and changes. Martin shows that besides he is a very skilled multi instrumentalist he also has very strong vocal capabilities. Barrow again played a razor sharp solo remembering the way Frank Zappa would have played it.

The song ‘Doreen’ felt like played by some ‘ dirty old men’ looking for a young girl.  What to say about ‘What’s New In Baltimore’? The rhythm section was sublime and sounded like a well trained organism and Tom Fowler showed a fantastic improvisation on his bass. Oh man what a bad ass on the bass!  I 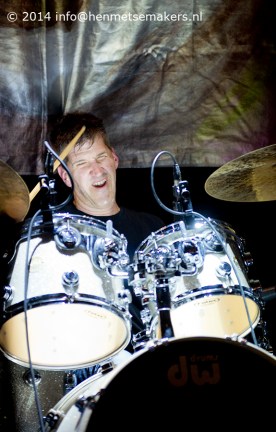 remember Zappa alumni Mike Keneally mastered this complex piece of work in one day before he showed up on an audition with Frank. Would have been great if Keneally would have been part of this combo. It would have brought this performance to en even higher level.  ‘ Cosmic Debris’ was sung by Barrow. His voice is a bit flat and that was a pity in this tune in which White visualized the lyrics perfectly. Ed Mann created all sorts of interesting pots and pans and White played a nice blues solo on guitar.  The most varied complex intro of the evening was the start of ‘Big Swifty’. This jazz piece evolved and lifted into a ‘loose’ and very adventurous improvisation with King Crimson like musical parts by all band members. During the middle part Tom Fowler shows his prowess  and unique skills by so typical lines on his bass. After the improvisation the band fell back in the Big Swifty theme and landed back on earth.

White excelled with great vocals on ‘City Of Tiny lights’ and waved parts of ‘Inca Roads’ into the song. This tuned develop towards a real groove and ended with an enormous varied drum solo following the theme of the song.  BFY played three encores. ‘ Stolen Moments’  started in way which remembered  me to America Drinks … Very applicable because many people in the audience were talking through this sublime piece of jazz. Instead of being a Rocking’ Teenage Combo BFU proved they are a Jack Of Al Trades with respect to Frank Zappa’s varied catalogue. During this song Martin also shared the story in which Albert Wing tried to shake hands with Sting during the 1988 tour in Chicago. Sting, however was more interested in his own make up. What followed next was hilarious: BFU started vocally (White as a real crooner) and musically joking on the egocentric behavior of Sting. Worth mentioning: Wing showed his revenge in playing a Wayne Shorter like sax solo in which he pulled Sting’s leg. Yes, Humor Belongs In Music.  Another example of entertainment was the performance of ‘The Illinois Enema Bandit’ with the famous Ray White at his best and Fowler playing still with heart and soul. After the band and the audience sung Happy Birthday to Chad Wackerman BFU concluded their first gig with the classic ‘Peaches En Regalia. 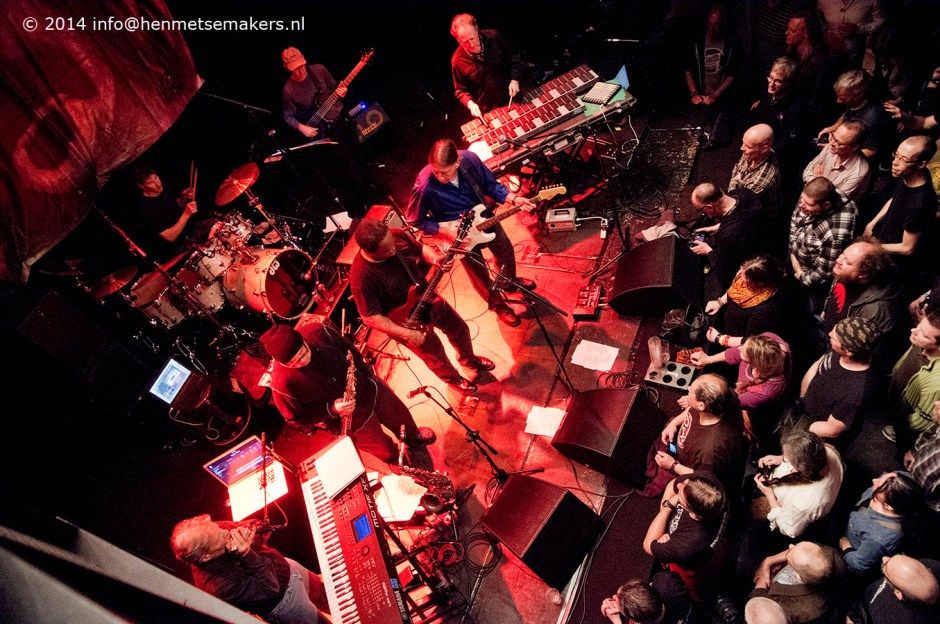 Resuming this evening: we have seen a septet who continue to keep Frank Zappa’s legacy alive in a very dedicated way. Knowing this was the first gig in this tour this band will grow even more during the upcoming gigs. So make sure you catch and see them. 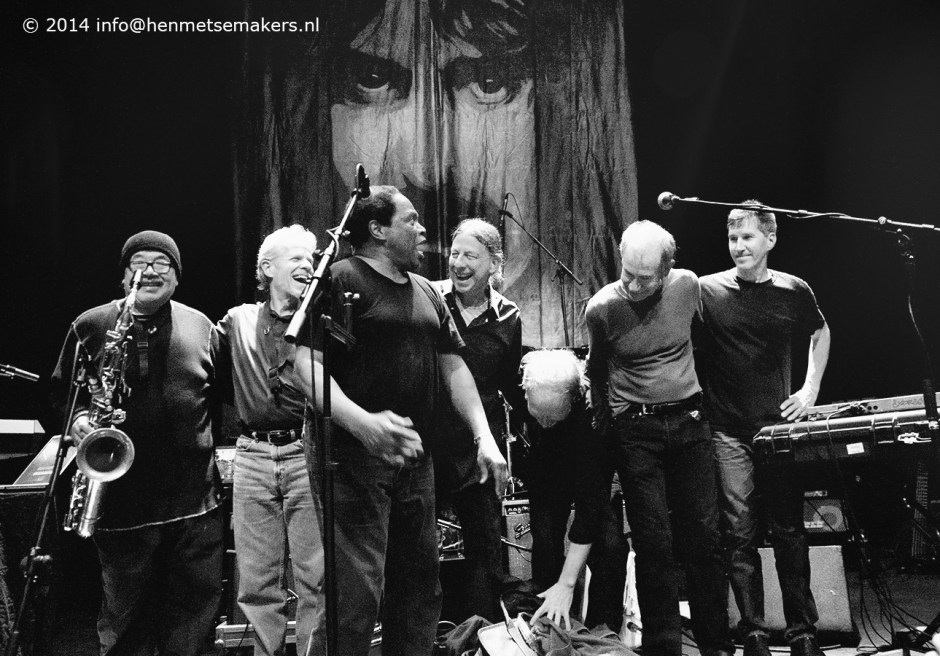